i made something! (amidst chaos)

Okay, so I know I promised you a pattern preview on Monday. Monday ended up being crazy, as was Sunday and Saturday and Friday. You see, we discovered that the summer-in-the-South-humidity was being soaked up by all of those cardboard boxes that contain my pattern pieces and we had to move the entire Sew Liberated stock from the garage into my basement. Which means, of course, that I spent the entire weekend with a basement that looked like it threw up all over the place. Um. That wasn't the prettiest sentence I've ever composed. But I can't think of any other way to describe it. So I spent the weekend cleaning up the basement's tossed cookies. Did I mention that I'm not quite in the nesting phase yet? It wasn't as exhilarating as my future, more pregnant self will imagine. At least it's done! And we're having a yard sale with some friends towards the end of September. Nothing like a good purge! (Okay, enough with the throw-up talk. On to cute babies and sewing. Thank you for letting me vent.) 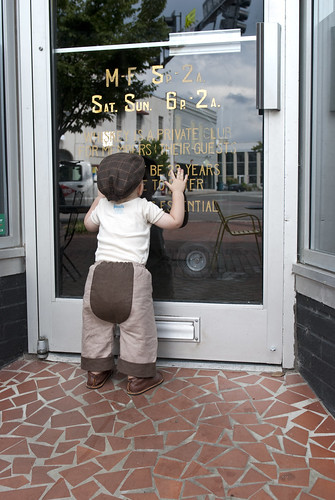 So. Cuteness. These baby pants? LOVE them. They're Rae's awesome new design, and they're specifically designed with the cloth-diapered baby in mind. They fit Finn like a charm. I did size up due to his poofy Mother-Ease diapers. He's actually quite average-sized in weight and height, but you add that diaper and a wool soaker, and the boy gains a lot in circumference! 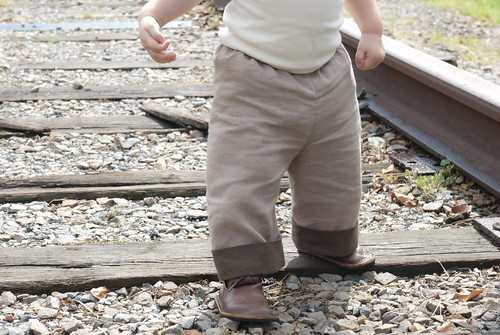 The clever rear panel and optional cuff bands make for a great opportunity to mix-and-match fabric. For these pants, I used a hemp-twill blend in two different neutral colors, thinking that they would serve as a great pair of dress-up pants for a wedding we're attending in a few weeks. I've cut out two more pairs - a gray striped linen with gray dot accents, and a white linen with black stripes. 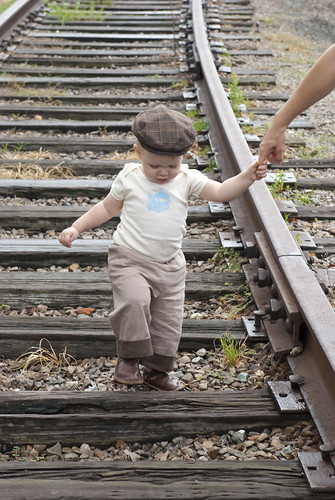 AND ... you actually ARE getting a new pattern sneak-peek! That little cap he's wearing? Yep. In sizes 6 months - 8 years. We're not fully ready to do an official announcement and put it up for pre-sale yet (see above excuse) but it's off for it's second round of testing now! Soon, mamas of boys, very, very soon! 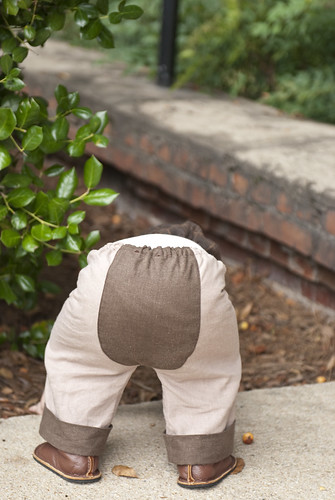 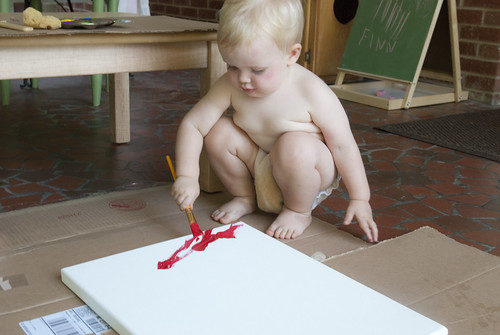 It was a success. I'm not sure who enjoyed the experience more - the toddler, the mama, or the grandparents watching from the wings. One thing's for certain - Finn certainly didn't notice all of the excitable adults around him, ooohing and ahhing and snapping around 2,431 photos. He was too interested in the paint to even care. Perfect. 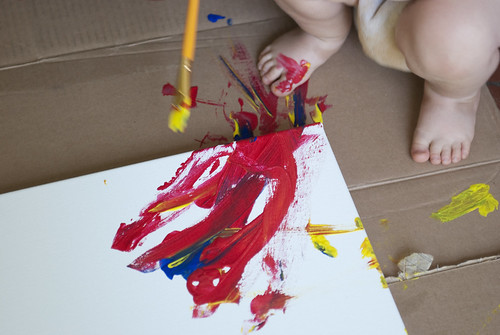 Here's what I did to prepare the scene: 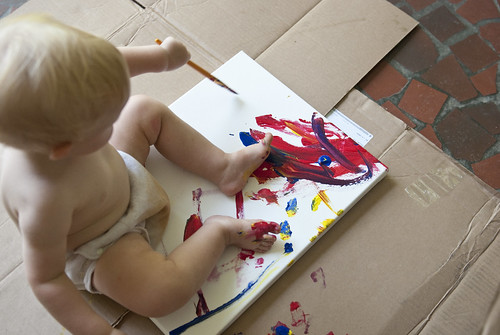 I think a key to this project's success was that I set everything up before Finn arrived on scene. He happened to be playing in the sandbox in the backyard with his Papa, but something like this could just as easily be thrown together during nap time. In fact, that's my plan once Patrick starts up school again on Monday and we get back into a regular schedule. Finn naps, wakes up and has a snack, then heads out to the porch for some art exploration. 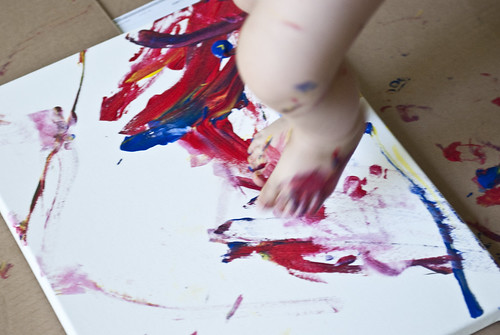 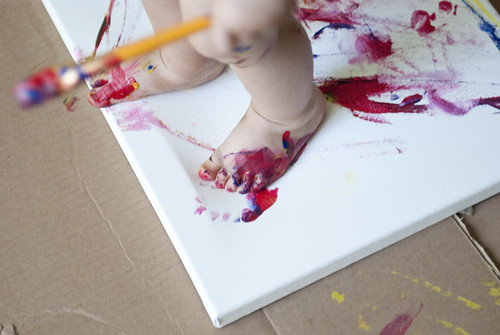 And who said that painting was just for the hands? (Check out this post from way back when.) Getting the feet involved only enhanced the final product. In truth, I was crossing my fingers for a few footprints and toe smudges.

I plan on hanging his first painting in our art space, which is why I chose to have him paint directly on canvas. Future paintings will likely happen on paper and other cheaper surfaces, but the canvas was certainly worth it. 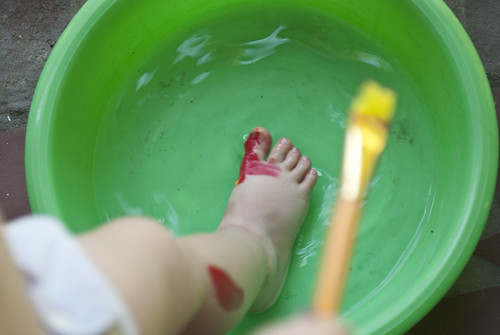 Of course, the clean-up was just as fun as the painting!

stop to smell the flowers

I found this little series on my camera, from when my parents were visiting. Somehow, it captures so much of what is precious about this age to me: the curiosity, the confidence, the delight in new discoveries, and his excitement in sharing such moments with the people he loves.

May your day find you discovering and delighting in some little pleasure! 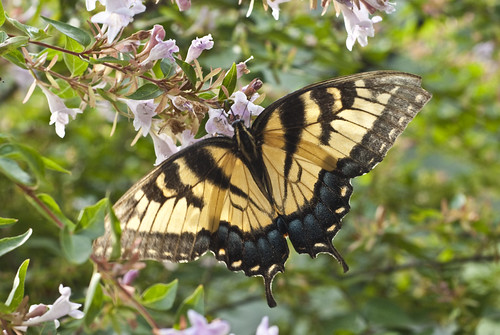 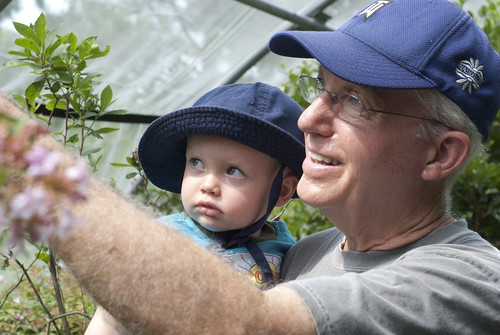 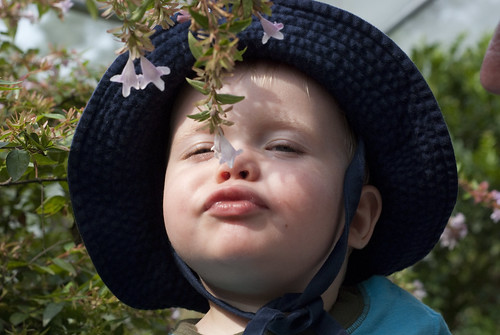 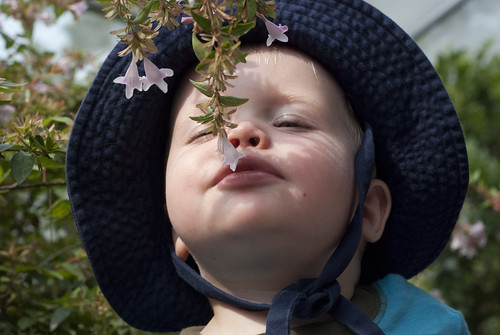 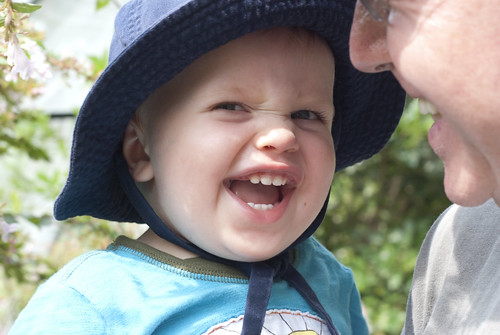 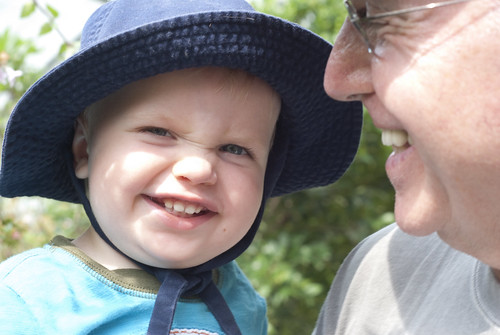 yogurt beards and other things 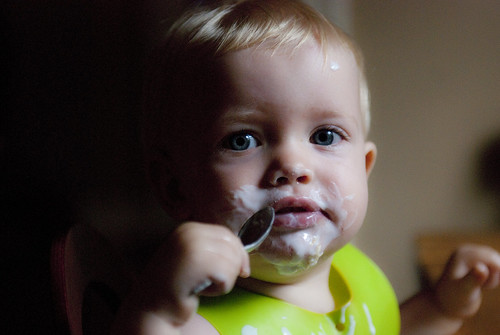 Where to begin? Three weeks is such a long time in Blogland, but such a short time in motherhood. It seems like I was just here, jotting down some thoughts. I turned my back for what seemed like a second, and it's been nearly a month! Anyways ... I'm back, and finally feeling pretty good. I'm still tired, but I wonder if that's due to the pregnancy or simply mothering a toddler. I'm guessing a bit of both.

But we do have a bit of catching up to do now, don't we? Here's a quick recap of the last few weeks:

There you go. It wasn't a particularly glamorous blogging vacation, but I do feel fortunate to be starting my second trimester with a hardy stomach, a bit more energy, lots of ideas, and an itching to get back into some creative endeavors.